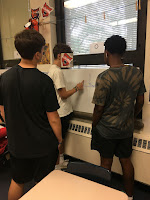 Last week felt pretty good.  I'm trying to use "Non-Permanent Vertical Surfaces"* in my math classes on a daily basis, and I'm happy with what I am seeing.  In most cases, I present a problem, send the students to the whiteboards in their random groups, and watch to see where their thinking goes.  Some days, they make wonderful mistakes, and I gather everyone around a particularly interesting whiteboard to quickly talk about the good thinking, the correct paths, and the miss-takes that lead to the very interesting solutions.  Then, I send the kids back to boards, and watch as they discuss what they had been thinking and make revisions.  Some of the best days are when this process goes through a couple iterations, and students thoughtfully revise their work several times.  I always bring them back together afterward to focus on a couple of the solutions, and highlight the vocabulary and formalize the thinking. 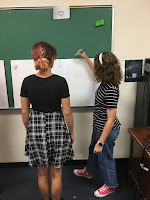 It's been great fun to plan and watch, and the kids seem to enjoy the process.  One day this week, I needed some additional space to make some notes, and erased one of the whiteboards, and the students from that group complained that I did so.  They clearly took pride in what they had been thinking (as most kids appear to so, since they often take pictures of their work before the end of class when we erase all the boards).  I apologized to the group for erasing their work prematurely, and promised I would not so that again.

In my Precalculus class, we're starting our unit on the trigonometric functions.  To start class, I sat in the middle of the floor with the kids gathered around, and drew a picture of a bicycle.  Apparently it was a really bad picture, as the pedals were not connected to the frame, and no one was sure which side had the handlebars and which side had the seat.  After straightening that out, I indicated that the bike had ridden over a piece of gum which got stuck to the wheel, and rotated around.  I asked the students to make a graph showing the relationship between the height of the gum from the ground and the time.  Here are some of the results:

To start the conversation, I asked the students who drew the graph on the left to explain their thinking, as they had a great discussion on whether the horizontal axis represented time or distance traveled.  The other students agreed that I had asked them to graph the height of the gum in terms of time, but spending a little time on the drawings allowed us to preview a cycloid graph, which I plan to discuss later in the course.
The other two graphs in the picture represent the work that appeared on all the other whiteboards.  The students with the pointy graph stated they believed it would be made of straight lines, since we had said the bicycle was traveling at a constant speed.  Great connection between constant speed and linearity!  That convinced most of the curvier graph groups that they had made a mistake.  A couple curvy graph groups stuck to their ideas and tried to explain that the vertical height of the gum was not traveling at a constant rate, even though the bike was.  It was a great few minutes of argument, after which I suggested we "do some math" to look at the evidence one way or another. 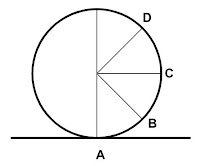 I drew a version of this diagram on the board, and everyone agreed that since the bike was traveling at a constant speed, the gum would rotate from point A to point C in the same amount of time it would rotate from point B to point D.  The pointy-graph folks were feeling pretty good.  Then, with some special-right triangle geometry (which we had to take a detour to justify, since that was something the students would have seen in Geometry, when they were doing school remotely) we showed that the vertical distance from Point A to point C was shorter than the vertical distance from point B to point D.  Since the BD distance was greater, the gum was moving faster in a vertical line there than along the AC distance.  A small existential crisis began arise among some of the pointy-graph-constant-speed kids, until another student pointed out that if you looked at the wheel edge on, you would see the gum moving only vertically.  Some discussions at the tables ensued, and everyone seemed more comfortable with the graph actually being curvy.
In previous years, these kinds of discussions and willingness to revise work and thinking occurred much later in the year, if they occurred at all.  Using the random groups with the NPVS's, and having a block schedule to give us time to explore made the rich conversations possible.
I can't wait to see what happens this week!
*Non-permanent vertical surfaces and visibly random groups are two of the strategies outlined in Peter Liljedahl's Building Thinking Classrooms in Mathematics.
Posted by PDeCraene at 8:09 PM