Basic arithmetic is not so basic

I found a book on "jettons" a few months ago, as I was working on a project with a Business Librarian at the Library of Congress.  It sat on my desk, mostly untouched until recently, as it was not directly related to my other work.  What intrigued me about the book initially was a diagram like the one below.  It reminded me of a musical staff or an abacus, and reading the caption, I saw that it represented an addition problem: 8342 + 2659. 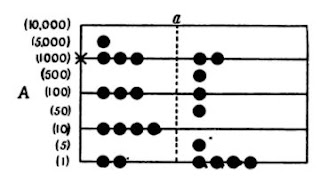 It's actually a diagram of a counting board that had been used in the 15th and 16th centuries as an aid to calculation.  To add the numbers, start at the bottom.  There are a total of six counters, or jettons, on the bottom line, so five are removed, and one is placed in the space directly above, representing five, and leaving one counter on the bottom line.  Next, there are two counters in the 5 space (the original one shown on the right and the one we just placed), so those are removed, and a new counter is placed on the tens line.  Again, 5 tens make fifty, so all five of the tens counters are removed, and a new counter is placed on the 50 space.  And so on up the board.  You can find the complete process on page 257 of Francis Pierrepont Barnard's The Casting Counter and the Counting Board, published in 1916.*

The process reminds me of the "Exploding Dots" lessons developed by James Tanton, which I had a chance to teach to 7th and 8th graders online last year.  (Shout out to Ms. Anna (@ampacura) for sharing her students with me!)  Exploding Dots can take you from basic counting and arithmetic, through any number base you want, and into polynomials.  (Do our "standard" algorithms work well for all that?)

It's also interesting that the counting board is a combination base-5 and base-10 system.  As I study math history and culture, I'm realizing that base-10 by itself is not the "natural" way to count for everyone.  If you use your thumb as a pointer and the three bones in each finger as one unit, you can count to twelve on one hand, or some cultures historically pointed to not just their fingers, but also to locations on their arms and head to represent numbers up to 27.  I thought I might have the title of the book where I found this information, but I can't find it in my notes right now.  Of course, I can picture the location on the shelves ...

All this to say that there are lots of different ways of representing and calculating with numbers.  And our "standard" algorithms for doing basic operations by hand were developed as a way to save ink and space on the paper.  (Perhaps they also arose as a way of notating how the counting boards were used?)  The more standard algorithm in the 19th century, as far as I can tell was to add numbers from left to right, no carrying needed, but more space required.  Or, you could just do the work in your head, using one of the many methods published in a multitude of pamphlets at the time.  How we do basic arithmetic is definitely not set in stone!  (Unless you're an ancient Babylonian using cuneiform.)

*It's really cool to have old books sitting on my desk.  I have a few from the early 1800s piled there as well.  I am terribly grateful to have the time to actually work inside the Library.

Posted by PDeCraene at 6:41 PM No comments: