Out of my comfort zone

There are reasons I chose to teach math.  I like the thought experiments, the proofs, the problems I can think about where all I need is my brain and maybe some paper and a pen.  And I don't expect to have to deal with this: 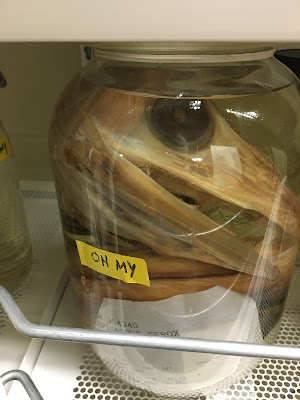 Okay, I only saw this* in one of the specimen rooms behind the scenes at the Smithsonian Natural History Museum.  I did actually get my hands on a buckler dory, however, as I was assigned that fish to notice and wonder about.  Our latest Fellowship professional development day had us learning about fish at the Museum, with folks who specialize in all things fishy.  So when we arrived at the classroom in the SNHS "Q?rious" classroom, we were each given a card which told us which fish we needed to find in the trays around the room to get to know up close and personal.
I found mine pretty quickly, because my card said "bukler dory".  Since it was named "Dory," I looked for something that might bear a resemblance to the character in the animated movie.  It wasn't bright blue, but it did have the right shape: 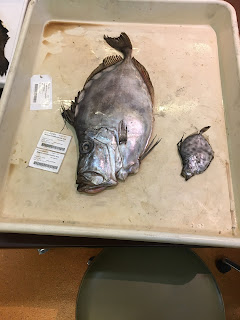 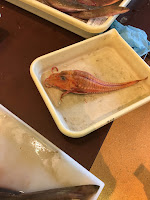 We spent some time noticing and wondering about our individual fish.  On my tray, there was a juvenile as well as an adult buckler dory.  Other trays had a puffer fish (not the poisonous kind), a sting ray (again, not poisonous, but still sharp), flounder, angler fish, different types of sharks, and something that looked like an alien brain sucker, that I wish I had written down the name of.
All the fish had been caught off the coast of Massachusetts as part of a fish population survey in the spring, and these had all been frozen until they were brought out for us to study.  They were on their way to be skeletonized and preserved for the museum's collections. 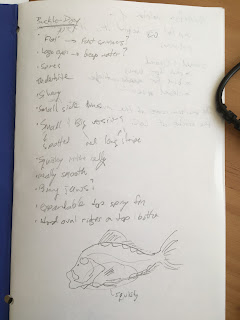 I was a little tentative at first about recording my observations of the dory, and just listed what I could see.  Then I got brave and poked it a bit (with a gloved hand) and found that one part of it was kind of like a balloon, while other parts were firm or downright bony.  I actually picked it up to see the other side, and I opened its mouth to peek inside (look at me being all brave!) and that's when one of the Museum's Fellows came over to see what I had found.  Matt just got his (bare!) hands on the thing and pointed out a number of really interesting features.  He opened the mouth all the way and explained how there are bony protrusions in the fish's throat that look a bit like molars and do the actual chewing of food.  (The tiny teeth around the mouth are all pointed inward to keep the food from swimming back out.)  There's also a mechanism to keep the food from passing over the gills.  Matt stuck his fingers in the gills to show me; they were really red because that's the most oxygenated organ on the fish.  (I decided I had already handled the poor thing enough and did not need to stick my fingers in there as well.) 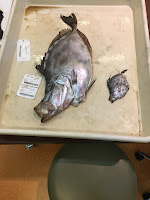 Here's a picture of dory with it's mouth opened all the way.  It works kind of like a vacuum to suck in as much food as it can.  (I won't be able to watch that fish movie the same way again.)
I walked around a bit to take a look at the other fishes.  (If the group of fish you're talking about has more than one species, the plural is "fishes".)  The biology and life science teachers in our group were completely in their element, happily chatting away about their fish, and hugging them like old friends.  Okay, they weren't actually hugging, but they had no problems getting their hands on (and sometimes inside) their fish.  While I don't think I enjoyed the experience as much as some of the teachers, I did have a good time, I learned a lot about fish, and I got to see the Notice and Wonder strategy in a completely new setting.
I also got to look backstage in the specimen rooms, but I'll write more about that later.  In the meantime, here's a selfie of me and dory.  (I'm the one who took the picture.) 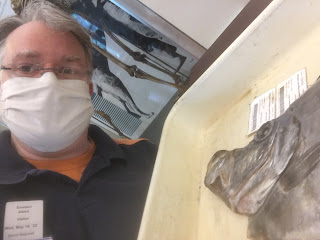 *I didn't catch the name of this particular specimen.  It's labeled "OH MY" because it's part of a group of items that curators bring out to show off, and that's the reaction most people have when they see it.  There were several OH MYs in the specimen room we got to see.  I think they did that on purpose.
Posted by PDeCraene at 6:40 AM No comments: