Choose your own adventure!

When I was in middle and high school, I came across a series of books called "Choose Your Own Adventure."  These were really exciting and I read many of them.  I realized this past week, that doing research at the Library of Congress and doing math have a lot in common with these books (including the excitement I felt as a kid.)

While wandering through some LoC collections of online books about games, I came across Games of skill, and conjuring: including draughts, dominos, chess, morrice[1].  "Skill and CONJURING"?!  My inner 13-year-old was immediately intrigued and I spent a bunch of time paging through.  I found the games "Morrice", also known as "Nine-Men's-Morris", and the game called "Fox and Geese".  I had heard of these games before, but never really played them, and since I was looking for things I and other math teachers might use, I found online versions of the games and played against the computer a few times.  I lost.  Every time.  The rules sounded simple enough, but the strategy is something I will need to think about a lot more!  The fact that a computer was always picking the best moves tells me there is some sort of algorithm that can be used, so I do plan on using these games in my classes.  Even though I don't know the strategy.  I'll learn something along with my students.

I continued through the book (choosing a different adventure), and found a bunch of puzzles.  One that intrigued me was this one, from page 91:

Based on the third figure, I realized that the rectangle (I decided that figure 1 was not just a parallelogram, but also a rectangle.) had to be cut into some sort of stair-step shape, and looking at the solution a few pages later, my thinking was confirmed:

Using the stair-steps to get what looked like a square (figure 2) was more intriguing, because I wondered if any rectangle can be cut this way in order form a square, or was there something special about the rectangle in the original problem.  So I posed myself this problem:

Is it possible to cut any rectangle into two equal pieces, so that the pieces may be rearranged to form a square?  I gave myself the constraint of the pieces being equal, and decided to stick with the stair-step division, so that I could at least answer that much of the question.

I needed some way to represent this problem, so I quickly sketched some diagrams and possible algebraic representations on a legal pad: 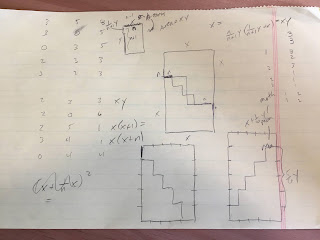 I didn't know exactly what I was doing, and the algebra was not obvious right away.  There were lots of "adventure paths" here.  I had to decide how many stairs and what variables might represent which aspects of the picture.  I knew that the area of the rectangle and the area of the square had to be the same.  I quickly decided that all the stair-steps needed to be the same size in order to fit the pieces back together.  I also figured out, based on the diagram in the book and some diagrams I drew (the bottom left one in particular) that there would be some number of divisions along the short side of the rectangle and one more division along the long side.  (As I write this, I am wondering if that's always true, or could I arrange the steps another way ...)  I didn't get very far with the problem, and I had other things to do, so I set it aside.

That night, while I was getting ready for bed, my mind wandered back to the problem, and I thought about focusing on the ratio of the two sides of the rectangle. If I divided the short side, x, into n pieces and the long side, y, into n+1 pieces.  Representing the two sides of the square using those variables, I could probably come up with a ratio of the sides.  Since I was tired, I made a note about this idea and went to sleep.  The next morning, I played with this idea and quickly drew a diagram of the rectangle and the resulting square using these pieces, and did some algebra to determine the ratio of y to x: 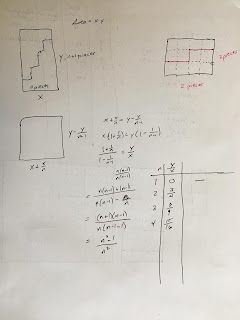 Since the number of divisions has to be a whole number, I made a table to determine some of the possible rectangles.  I realized that the ratios did not look right, as y/x should have been bigger than one, rather than less than one, and the the pink and black diagram showing the 3x4 rectangle certainly was not going to form a square.  My algebra looked okay, but something was seriously wrong.  When I met an untimely end in a Choose Your Adventure Book, I always backed up a page or two and tried again, so ...

I rechecked my diagrams of the rectangle and resulting square, was happy with the variables, and got a new sheet of paper to start the algebra again.  I immediately saw that I had changed the n+1 from the diagram to n-1 in the first run at the algebra, so redid the algebra on a new sheet, and made a corresponding table of values as well as a few diagrams to verify the work: 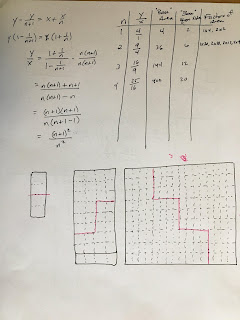 It does not surprise me that the base area of these rectangles/squares were perfect square numbers, and I did not think it unreasonable that the table was skipping the odd square numbers; but why was it skipping some of the even square numbers as well?  The resulting side lengths of the squares were increasing in a quadratic sequence. Why not a side length of 8? or 16? Maybe the fact that these are powers of two has something to do with it.  But then why is a side length of 14 not on the list?  Is there something about the factor pairs of the square numbers that worked?  Maybe there's a different way to divide up a rectangle to get these sizes.

As I started to pursue these ideas, more questions and ideas popped into my head, and I realized the adventure could continue:

Now I have lots more to explore, including the history of stationery.  I don't know if I'll answer all these questions, because working on one of them may lead to other more interesting paths.  Or some other completely different and shiny math problem will show up and beg me for attention.  I'm always interested to see where the next path takes me ...
References
1. Games of skill, and conjuring: including draughts, dominoes, chess, morrice. George Routledge and Sons, London, 1865.
Posted by PDeCraene at 12:19 PM No comments:

Lost in the Stacks

For the last 31 years, I have lived by a bell schedule and always had papers to grade or lessons to write.  All of a sudden, my days have become very free-form and my schedule nebulous, and I sometimes feel a little lost without the school-day structures.  While I am free to explore the Library's online collections, and wander through as many virtual stacks as I'd like (and go to the bathroom whenever I feel the need), I have found myself jumping on more tangible projects right away, because I am so used to producing or accomplishing something in a short amount of time.  A couple of my Learning and Innovation Office colleagues today reminded me that I can be patient, that they expect me to explore for now, and that the "production curve" should be very low at this point.  Part of the process is to dive into ideas, note what I'm thinking about them, and keep track of where I find them (since it's easy to get lost even when the stacks are virtual).  When something makes me want to share its discovery with someone, that's the time to start writing.  This takes some getting used to.* 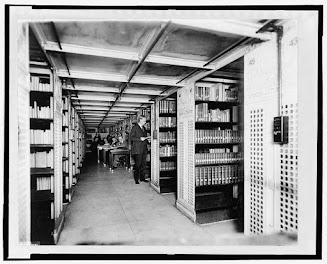 On the other hand, I do have a couple small projects to work on.  One of them involves research on a particular topic, and the other two involve actual writing.  One of the latter is for a blog post introducing myself on the LoC blogs.  I'll link to that when it gets posted.  Which won't be until October.  Because nothing just "gets posted" to the LoC blogs.  There is a lot of editing that happens, and I have been warned that anything I write will come back to me with lots of "red ink" indicating what needs fixing and rewriting.  Three things jump to mind when I hear this.  The first is something my dad told me when I was a freshman in high school: "There's no such thing as 'good writing', there's only good rewriting."  And a now-retired colleague from the English Department, who was an informal mentor to me, told me "Peter, once you write something and send it off, it's no longer yours, but it's better to get it out there and let it benefit from the collaboration."  This is all good advice that I try to live by, but the third thing I think about was the time that another friend from the English Department and I sat in each others' classes for two weeks.  She did the math homework and took the quizzes on logarithms, and I completed the writing prompts and essays for Crime and Punishment.  She pulled no punches when grading those essays, and after I got over the shock of having that red ink on my essays (despite those earlier aphorisms), I did learn something about myself and my writing.  So, thanks, Laura; those two weeks talking with you about what it's like to be a student in our classrooms and growing as a teacher and a learner were really important to me.

So where in the stacks was I lost this week?

... and I have several dozen links to other ideas I still want to explore.  I am really grateful for this time I have to indulge my curiosity.  And I'm also grateful for the folks in my Office and the various other divisions who have been really kind about sharing information with me and pointing me in new and interesting directions.  Thank goodness this is all online for now, otherwise I really would need help finding the bathroom.
*To folks teaching or learning remotely, on a hybrid system, or even in-person right now, not having a bell schedule probably seems like a lame complaint.  It is, and I'm not really complaining about it, just noting that the shift in thinking exists.
Image Source: Library of Congress. Interior. Book stack. [192-?] Photograph. Retrieved from the Library of Congress, <www.loc.gov/item/2005681088/>.
Posted by PDeCraene at 9:40 PM No comments: